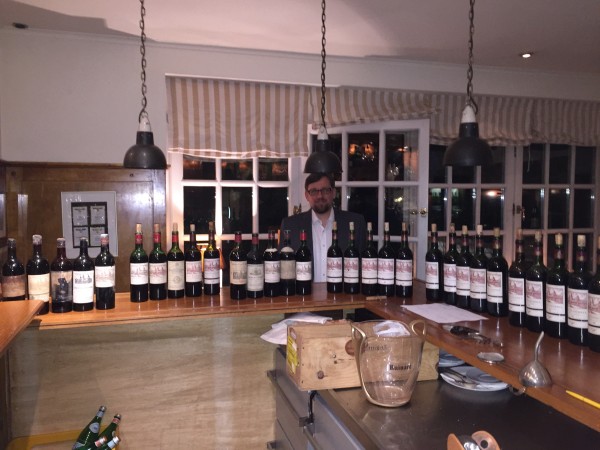 This was the topic for the first Dinner of our annual Autumn Rare Wine Event at Hotel Kronenschlösschen.

Steven Spurrier was one of our guests at this event and he has kindly allowed us to publish his notes:

The noble “Landhotel” Kronenschlosschen on the banks of the river Rhine at Eltville-Hattenheim is prized by food and wine lovers for its superb cuisine and incredibly deep and varied wine list and revered for hosting the Rheingau Goumet & Wein Festival, the 21st version of which takes place with 24 chefs and 16 wine producers from 23rd February to 12th March 2017.   While Herr H.B. Ullrich, the hotel’s owner, is the host of this annual event, he was a guest in his own house of Jan-Erik Paulson, Swedish-born and German resident owner of Paulson Rare Wine, a continuously re-filled treasure trove of mature bottles purchased through a web of contacts built up from deep knowledge and constant research.  In a spirit of generosity which is so admirable in those with fine cellars, he had planned a weekend at the end of October to share a few dozen bottles and had sent me an immediately accepted invitation to take part.  Here are the wines we savoured and the dishes that accompanied them:

The wines were served in 6 flights of 5 wines, after each flight Jan Paulson asking for a show of hands of who preferred which vintage.   Across the range the colours were very fine, younger than I expected, with depth, clarity and “Cos-ness” very present.

1973 -  Light and nice clarity, but the lightness of the vintage leads to a dried out finish.

1975 -  Good depth of fruit and firm but not green tannins, the concentration of the year is there and it still has a future.

1979 -  More youthful with warm, slightly earthy flavours, shows the over-production that year, but pleasant and balanced.

1981 -  Quite robust on both nose and palate then tightens up on the finish, but the Cos fruit will stay for a few more years.

Voting was varied, 1975 coming out ahead.

1984 – More fruit and “claret-ness” than expected from this unripe year, still good for a year or two.

1928 – Deep red, tawny rim, lovely wild roses bouquet with both fragrance and sweetness on the palate, great presence and purity, not drying out, a great wine.

1953 -  Fine colour with no real age, beautifully expressive with fine texture, a “feminine” Cos, slight dryness on the finish, a really lovely wine.

1955 -  Sadly corked but there was fine, firm fruit behind this.

1959 -  Deep and still fresh colour, nose and palate show the heat of the year, a hint of volatile acidity but a good solid wine.

1962 -  Good firm colour and very good claret, quite dry but the natural richness of St Estephe is still just there.

1961 -  Surprisingly lighter in colour and body than 1962, but showing a supple, lissom texture of fruit with ripeness that will keep it going.

1970 -  Young colour, firm and full, robust and rich, almost “Californian”, more solid than elegant with a few years to go.

1987 -  Nicely balanced wine, nice clarity of fruit but drying out.

1988 -  Very good colour and depth of fruit and very Cos, robust, firm with striking clarity and good future.

1989 -  Lots of depth and shows the heat of the vintage, shows huge richness but also a little raw on the finish, less balanced than 1988.

1990 -  Quite different to 1989, with fragrance, wild violets on the nose, classy depth, elegant and smooth, a “Lafite” Cos, good for another decade.

1991 -  Richer and deeper than expected but slightly earthy and chunky, young but more concentrated than elegant.

1992 -  Good colour and some concentration but the lack of ripeness is evident.

1995 -  Good broad fruit, depth and weight, all of a piece, just a little chunky, but good future.

The vote went almost unanimously to 1996.

Before we broke up a vote was taken for the wine of the weekend.  Three guests chose Cos d’Estournel 1928, five chose Haut-Brion 1953 and seven chose Weil’s Kiedrich Gra”fenberg Riesling Auslese 1921.  Perhaps the Hotel Kronenschlosschen will see such wines again, but I know I will not

Here are my (Jan-Erik Paulson) notes:

I have always been an admirer of the wines from Château Cos d'Estournel and the 30 wines we drank this evening did nothing to change my opinion. Below are personal short comments on some of the wines.

1971 - very good fruit. Sweet and charming. My favourite in this flight.

1985 - lovely nose with a touch of eucalyptus. Beautiful balance. Elegant. My favourite in this flight.

1928 - A wonderful nose of dried roses. Sweet and lovely fruit. Charming. My favourite wine of the whole tasting.

1934 - oxidised. Sweet fruit in the background.

1961 - good and charming but lacking some concentration. I had this wine twice in the weeks to follow and they showed better.

1996 - good concentrated fruit. Good future. My favourite in the flight.