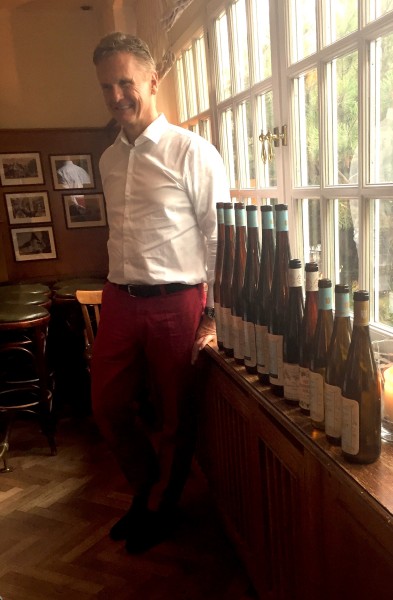 For Saturday lunch at our Autumn Rare Wine Event we present one winery. This year Wilhelm Weil pulled some of his greatest wines from his cellar. The 1921 Kiedricher Auslese is one of the greatest white wines I have ever had the fortune to drink. Thank you Wilhelm.

Steven Spurrier was one of the guests at this event and he has kindly allowed us to publish his notes:

The noble “Landhotel” Kronenschlösschen on the banks of the river Rhine at Eltville-Hattenheim is prized by food and wine lovers for its superb cuisine and incredibly deep and varied wine list and revered for hosting the Rheingau Goumet & Wein Festival, the 21st version of which takes place with 24 chefs and 16 wine producers from 23rd February to 12th March.   While Herr H.B. Ulrich, the hotel’s owner, is the host of this annual event, he was a guest in his own house of Jan-Erik Paulson, Swedish-born and German resident owner of Paulson Rare Wine, a continuously re-filled treasure trove of mature bottles purchased through a web of contacts built up from deep knowledge and constant research.  In a spirit of generosity which is so admirable in those with fine cellars, he had planned a weekend at the end of October to share a few dozen bottles and had sent me an immediately accepted invitation to take part.  Here are the wines we savoured and the dishes that accompanied them:

One of the Rheingau’s greatest estates with 100 hectares of only Riesling around the village of Kiedrich.  The soil is green/grey slate.  The Klosterberg and Turmberg vineyards are Weil monolpoles, the Gräfenberg, with a little loam soil, is 95% owned.  The wines were presented by Wilhelm Weil.

Flight One – The three estates in 2013 - Halibut with radish and gooseberries.

All wines were harvested at 96 degrees Oechsle, so of potential Auslese ripeness and were fermented dry to 12.5 degrees alcohol.  The wines were in magnums.

Kiedrich Gräfenberg – Fuller colour, broader and richer on both nose and palate though just 4 g/l RS, this is Montrachet to Turmberg’s Chevalier.  98/100.  2020-50.

Eight votes went to Gräfenberg, 3 each to Turmberg and Klosterberg.

Wilhem Weil had chosen cooler years, less full-bodied and rich, as for him this is the “optimum” style of Riesling, not the “maximum” style.

1953 – For Weil one of the two, with 1921, best vintages of the 20th century.  Fine gold colour, terrific vigour and vibrancy on the palate, evidently mature but not showing its 63 years, concentrated light honey matches Riesling acidity, a great experience.  98/100.  To 2033.

2001 – This was the estate’s Gold Capsule bottling, with 200 g/l RS but never any botrytis.  Full amber gold, very rich and full, more Sauternes, even Vin Santo, than what has come before, hugely rich with superb acidity showing through.  97/100.  To 2035.

1921 – (This bottle was offered by Wilhelm Weil, who now has just 7 bottles left in the cellar.  The only time in recent years that a bottle of the estate’s 1921 was sold was at a Christie’s auction at Schloss Johannisberg held by Michael Broadbent on November 13th 1999 with a reserve price of 1,000 DM, the hammer price rising to 20,000DM, a price still not rivalled at auction for a single bottle of white wine.)  Bright amber gold, quite incredible “burnished” nose, waxy and polished like dark wood, concentration, elegance and maturity meet to form a totally perfect wine, nothing out of place, quite incredible at this age.  100++

The 1921 left the room silent, no votes were offered.

Before we broke up a vote was taken for the wine of the weekend.  Three guests chose Cos d’Estournel 1928, five chose Haut-Brion 1953 and seven chose Weil’s Kiedrich Gräfenberg Riesling Auslese 1921.  Perhaps the Hotel Kronenschlosschen will see such wines again, but I know I will not.